The medicinal and therapeutic properties of cannabis and its components (THC, CBD, and beyond) are nearly agreed upon. Legalization state by state gave the green light to research projects pinned down by federal drug classifications, but that certainly doesn’t mean the cannabis industry is done evolving or exploring. Innovations come nearly every day, courtesy of new companies striving to establish their best practices. One such company is Papa & Barkley, which launched in June 2016 with their Releaf Balm, a THC-infused wellness topical. Now, nearly fives year later, Adam Grossman (founder and CEO) and Guy Rocourt (co-founder and chief product officer) continue to launch cannabis goods—lotions, tinctures, capsules and more—that do good for one’s mind and body.

“About five years ago I had moved back home to Boston from NYC to take care of my dad,” Grossman tells CH, recalling the days leading to Papa & Barkley’s inception. “He had become bedridden, then hospitalized and ultimately put on hospice care due to spinal stenosis. I was desperate to find a solution and none of the prescribed pharmaceutical pain medications were working. I researched cannabis pain balms on the internet, called up a friend from high school and bought $500 worth of the best cannabis I could find. I borrowed a crockpot from a neighbor, went to Whole Foods to buy the other ingredients and cooked up my first-ever batch of pain relief balm in my kitchen. The next day I applied it to my dad’s back and 20 minutes later I could get him out of bed. I kept applying it multiple times a day and caring for him and he got better. Over time, he was able to get off of hospice care and lived almost two more years.”

Grossman’s recipe offered his father, and many others, relief before it became the flagship product for P&B’s launch. “I started giving away samples of the balm to friends and family and getting amazing feedback. It became my mission to make this pain relief solution available to more people, so I founded Papa & Barkley—named after my dad, Papa, and his dog,” he says.

Like most of us, Grossman’s experience with cannabis began informally, with experimentation in adolescence. “I started using cannabis for pain relief while in college. I was a pitcher on the UMass baseball team and had a lot of shoulder and elbow pain. Back then, I had no clue about making topicals or that they even existed. So the pain relief then was just from smoking.” Then, he had no knowledge of the “entourage effect” and its necessity. When cannabis is consumed intact—in a full-spectrum state with all cannabinoids working in harmony—that’s when it is most effective, and the least debilitating, too.

Papa & Barkley’s new Releaf Gummy Edibles, which launch today, 20 July, further the mission of the brand’s original product. They’re made with “solvent-less hash made from trichomes—the ripe, cannabinoid-rich fruit of the cannabis flower—to maintain the full spectrum of cannabinoids, terpenes, and phytonutrients in the plant,” the fine print reads. This process was passed through the brand’s Scientific Advisory Board, which upholds the company’s core value of “scientific rigor.” Grossman explains, “We believe (and the research supports) that the cannabis plant has the most therapeutic benefits when it’s kept intact, where all of the cannabinoids can work in concert with each other. Therefore, we’re dedicated to infusing the whole plant into all of our products and keeping solvents and distillates out.”

The THC-infused gummies come in apple, berry, strawberry, and orange flavors and are sugar- and gluten-free, with zero calories, and made with all-natural fruit juices and coconut oil-infused hash—which is the product of “pesticide-free, sun-grown cannabis flowers from our farming partners in Humboldt County, California,” Grossman says.

“We use only natural ingredients and essential oils to pair with our cannabis, and our infusion process keeps our products completely free of chemicals. To ensure the cannabis we use is of the highest quality, we partner with expert farmers who believe in producing clean plants that translate into effective products, and we value these relationships with our dedicated farmers tremendously,” he continues.

The formulation for Releaf Gummies (their first edible) emphasizes the quality of their sourced cannabis and the precision of their processes. Guy Rocourt, who Grossman calls “an artist with the plant,” took the lead on developing it through to launch.

“Our gummies are actually made with regular hash, not cold water,” Rocourt tells CH. “To make Papa & Barkley’s Releaf Gummies, we mechanically separate the kief, or cannabinoid-rich trichome crystals, from the cannabis plant and then melt those crystals into our coconut oil base. While the process is more complicated than pouring THC isolate or distillate into your edible formula, our process of infusing solvent-less hash into coconut oil is really quite simple. It’s a classic ‘less is more’ scenario; rather than opting for a technologically and chemically intensive process, we go for a super-natural, chemical-free process.” This process, Rocourt says, “lends itself not only to a cleaner product, but also to a better high. When you eat an edible made from THC isolate or distillate you get a one-dimensional effect because you only get THC; you’re missing all the other cannabinoids in the plant.”

Because all of the natural cannabinoids are present, the gummies offer balanced, well-rounded relief. Their onset, which begins with eating one (and its 5mg of cannabinoids), is made easy because of its delicious base, a formulation Rocourt came up with alongside a Eureka-based, Black-owned business: Sistah Vegan.

“Many Papa & Barkley users have dietary restrictions either out of preference or necessity; they’re health-conscious consumers, athletes or peak-performance-seekers, or older adults who have health conditions that require them to eat a clean diet,” Rocourt says. “None of the brands that make edibles are speaking to these consumers. All the gummies on the marketplace are filled with sugar, corn syrup, dyes, and other unnecessary additives. We took it upon ourselves to create an edible that would work for individuals who see cannabis as a form of wellness first and foremost.

To do so, we partnered with an amazing local dietician named Patricia Jones—aka Sistah Vegan. Patricia runs a vegan catering business that also provides a meal-plan service. She and her son helped us develop a functional and healthy edible made with the whole plant.”

Not only are these edibles healthier—with the apple and berry flavors also being vegan—but they’re also helpful for battling stress, anxiety, pain and discomfort caused by inflammation or injury. They take effect within two hours (though sometimes as quickly as 15 minutes) and offer relief for three to eight hours.

Like Grossman and Rocourt, we’re hesitant to refer to anyone using cannabis, especially when done so medicinally for its therapeutic benefits as a patient, but these gummies could be adopted into a pre-existing wellness routine as an auxiliary element to be tapped into when the time is right.

“Caring for the ones we love is the foundation of this company; it’s what inspired the name and continues to shape how we operate,” Grossman tells us. “Today our mission is to unlock the power of the plant to improve people’s lives, so we offer products to make daily living more comfortable.”

Papa & Barkley’s Releaf Gummies are available now in packs of 20 gummies for $16—where cannabis products are legal. Find a retailer near you on their website. 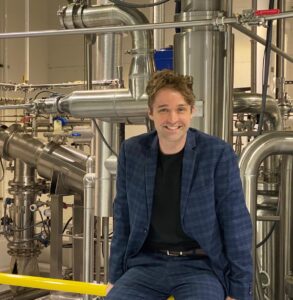 CBD Oil Therabody Elevates The CBD Category From The Ground Up With The Launch Of Its Proprietary CBD Product Line, TheraOne

CBD Oil Are $1 Weed Tablets the Future of Productivity?

CBD Oil The Characteristics of Where to Buy Cbd Oil

CBD Oil Does CBD Oil Get You High?

CBD Oil 5 Questions With Flower By Edie Parker: ‘Cannabis For The Cool Kids’